Some people say they wish they were fearless but as Elizabeth Gilbert says, the only people that are fearless are usually psychopaths or children. The mindset to adopt isn’t to strive to be fearless, it’s to feel the fear and do it anyway.Of course we’re talking within reason here and it’s not about putting ourselves in danger. The thing with fear is that it doesn’t really make a distinction between us jumping off a cliff and us doing something that makes us vulnerable (ex: starting a creative project). It sends you the same kind of “danger” signals so it’s up to us to distinguish them.Once again, I love Elizabeth Gilbert’s approach on fear. She says that fear isn’t our enemy, it’s actually a well intended friend. It’s a friend that we take along with us on this road trip that is life but the trick is to not let it get in the driver’s seat. It can make suggestions as to where you should or shouldn’t go but it’s you that is driving and that knows the way.Use fear as a background voice rather than the main one that navigates your life. If it raises its voice, listen to it for a moment to see what it has to say but know that it often freaks out for nothing. Just tell it “thank you fear, I appreciate you having my back but I’m going to do XYZ anyways because it’s something that’s important to me and it’s not putting me in any physical danger”.

Once we stop fighting fear we can focus our energies on being brave and accomplishing what our heart is calling us to do. Wishing you a wonderful day where you take an act of courage and do one small thing that scares you to show yourself what you are capable of. 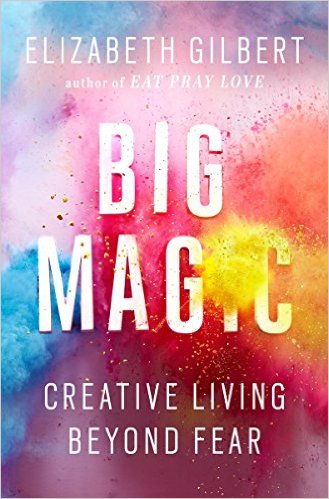 Launching my blog was my first big creative endeavour and I was terrified to do it. In fact, I procrastinated for several years because I was listening to the voice of fear. It might sound silly but as a blogger, you’re really putting yourself out there. I wish I had had this book years ago as I would have probably acted sooner. That said, I still have fearful thoughts regarding the Red Fairy Project because it’s something that is so close to my heart and I never know how what I am doing will be received. This book taught me that it’s not my job to judge what I do, I just have to put it out there. If you have any creative projects, I highly recommend this book. Purchase Big Magic by Elizabeth Gilbert.

Did you find this post helpful? Like it and share it with your friends! The more we are to bring daily inspiration into the lives of others, the better.